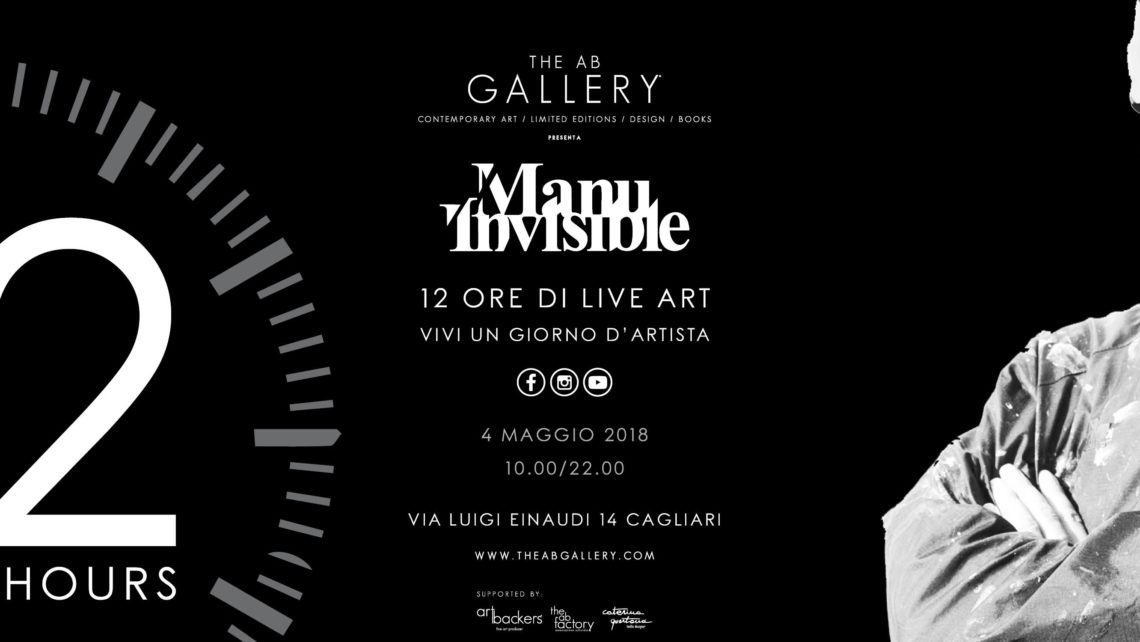 He now occupies entire pages of national newspapers and not only, remaining more and more “Invisible”

Mentioned on the same level as Klimt and Munch, on the echo of the fresco realized for the University of Cagliari’s rectorate, Manu Invisible, returns to Cagliari with an extraordinary performance, in absolute preview, at the new The AB Gallery, Friday 4 May in via Einaudi 14 and in live streaming on five social channels Facebook and Instagram.

Manu Invisible, one of the most significant Italian writers and street artists, will be the protagonist of a performance titled 12 ART HOURS in close contact with the public of fans, supporters, collectors, in collaboration with The AB Factory and Art Backers.

A unique event of its kind, where the large windows of The AB Gallery will become for 12 hours, a real and virtual look thanks to the online streaming, the continuous workshop and the performance of the street artist Manu Invisible.

12 ART HOURS will be in contemporary live on over five profiles of Facebook and Instagram with unique shots and points of view for a shared experience, during which the street artist can interact with the many who will follow the direct and special together with some guests that will visit him.

For the street public it will be like seeing the scene that takes place inside a window like those of the bars painted by the great Edward Hopper, a contamination between inside and outside without interruption.

Manu Invisible hidden by his trustworthy mask, dark and angular, to preserve his identity, has been working for over fifteen years dividing himself between anonymous urban spaces and infrastructures all over Europe, with the aim of giving new meaning to these places, transforming them into real open canvases.

Often the works of Manu Invisible are under the eyes of those who drive quickly on a highway or walk absently in front of a wall; the gaze is captured by a forgotten word or a mural with bright colors, but how deep we stop to observe them carefully, when we constantly have our eyes bent on the screens of our virtual reality?

This time the street artist Manu Invisible, May 4 2018, will be under the gaze of everyone through the windows of the new AB Gallery in Via Einaudi 14 in Cagliari, where he will work live streaming from 10.00 to 22.00 on a new unpublished work and will sign the latest Limited Edition by Art Backers, for the happiness of passers-by and its online followers.

Manu Invisible embarks on his artistic career at the beginning of the 21st century in Sardinia, to then project himself onto the European scene. Coming from the world of graffiti, he maintains the urban approach of this discipline, manifesting a “propagandistic” tendency in style and in the message.
His art includes several facets: street art, muralism and small-format works.

Manu Invisible is an artist who conceals his identity behind a shiny black mask with sharp shapes, inspired by the angular geometries of urban architecture and the darkness of the night. After graduating from Cagliari’s Liceo Artistico Foiso Fois, he later realized in Sardinia and many other European cities murals, among the most recent “Influences” at London’s Camden Town in London and the commission received from the University of Cagliari, where in the Aula Magna Capitini he realized two works with fresco painting technique. He has also been part of the group show “Multi Street ART” at The AB Factory exhibiting alongside world-famous street artists including Banksy, Invader, Kaws, Ron English, Shepard Fairey presented for the first time in Sardinia.

The AB Gallery is the first art gallery that supports art and artists, dedicated to art lovers and future collectors.

A new vision of art aimed at young people, and not only, “art lovers” who believe in a sustainable and accessible art for everyone between sociality, culture and collecting.

The AB Gallery offers a careful selection of works of art by contemporary and historicized artists and photographers, together with the exclusive Limited Editions of the Art Backers art publisher, flanked by sculptures and design works.

On May 5, 2018 opens the third office of The AB Gallery in a permanent plan in Cagliari, where a unique and multiform space is born, in Via Luigi Einaudi 14, interpreted between concept store, artistic artisan workshop, art gallery and place for the beautiful and culture.